Written by PDF2XL Support
Updated over a week ago

The command line silent conversion allows you to run your conversion without the need to open the user interface. This is particularly handy when you need to convert folders with volumes of documents within.

A silent conversion should always be run from a .bat file. The reason being, if the command is called from a batch, a process is created for each file and Windows waits for it to end; if it's called directly, all the processes are concurrent.

If your command script has any occurrences of %g, you will need to replace it with %%g before running your .bat file.

The cmd prompt should return with "echo 0". 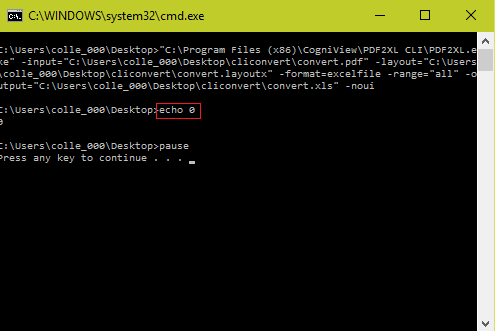 If there is a different code here, something went wrong. See a list of error codes here.

Here is a sample of a very basic silent conversion script and the one used in the video above:

Of course, you would need to modify the paths in this script so they are relative to your document and folders.

This can also be run directly from the Command Line.

Did this answer your question?